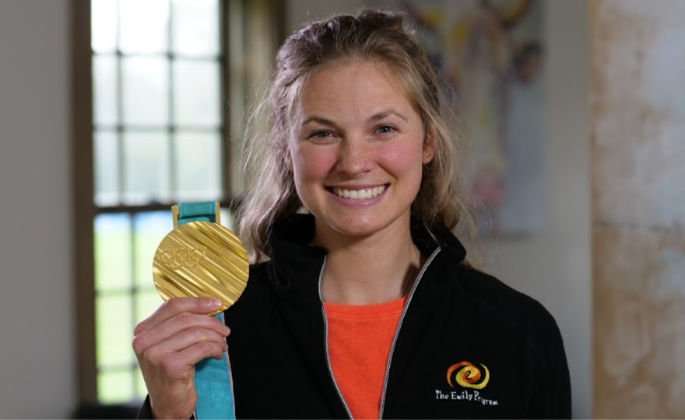 Jessie grew up in Minnesota and was riding in her parents’ ski backpacks before she could walk. By the time she was in high school, she had tried violin, track, dance, and soccer, but her heart was set on skiing. In high school, Jessie skied on the Stillwater High School team for six years and found happiness spending time outside and with her teammates.

Jessie’s career highlights after college include winning multiple medals in Nordic World Ski Championships and the distinguished honor of competing as a U.S. athlete in the 2014 and 2018 Winter Olympics. At the 2018 Winter Olympics, Jessie won the first-ever gold medal in cross-country skiing for the women’s team sprint and was later chosen to be the flag bearer for the United States during the closing ceremony.

Jessie’s Experience with an Eating Disorder

Recently, Jessie Diggins was chosen to be one of the athletes featured in ESPN’s 2018 Body Issue and shortly after, chose to publicly share her experience about an eating disorder that she struggled with both during and after high school. Since sharing this story, Jessie has quickly become a role model and inspirational figure for those with eating disorders who are pursuing recovery. In a recent blog post, she wrote, “I checked into The Emily Program, a national leader in eating disorder treatment. It was the hardest thing I’ve ever done in my life, but also the most important. Because it saved my life, in every way that a life can be saved.”

As a professional athlete, Jessie has faced scrutiny about what she looks like and some days, she admits that it’s tough. However, Jessie believes the emphasis shouldn’t be placed on looks or size or shape, but rather on what you and your body can do—whether you are an athlete or not.

“Shape shouldn’t matter,” she told us. “But do you feel good? That matters.”

By partnering with The Emily Program, Jessie hopes she can change the narrative around body image and create a more positive, affirming society for people of all shapes, sizes, and identities.

Jessie shares The Emily Program’s vision of the future—that one day, we can all have healthy, peaceful relationships with food, weight, and body image. Jessie says she learned a lot from The Emily Program and wants to share what she’s learned with others. She wants everyone to know that eating disorders aren’t choices or phases and that getting help isn’t shameful, it’s brave. She wants every individual to know that when they are ready for recovery, there is someone out there waiting to help them.

The Emily Program (and Jessie Diggins!) Celebrate 25 Years of Service

This year marks The Emily Program’s 25th anniversary of providing personalized eating disorder treatment to a variety of individuals in all stages in life. We will be hosting a celebration that is open to the public on November 3rd (more details below).

At The Emily Program, we combine our evidence-based treatment with personalized interventions. We’ve found that effective eating disorder treatment requires awareness of the genetic, biological, psychological, social, and cultural impacts on each client. We respond to the whole person at The Emily Program, utilizing a multidisciplinary team of experts, including therapists, dietitians, and medical staff.

Who: The 25th anniversary celebration of The Emily Program, a national leader in eating disorder treatment, founded in 1993 in Saint Paul, Minnesota

What: A celebration featuring Olympic Gold Medalist, Jessie Diggins, founder Dirk Miller, and other honored guests. There will be an inspiring program featuring Jessie Diggins as keynote speaker, photo and autograph opportunities with Jessie, interactive learning stations, inspirational messaging, and Emily Program staff available to answer all of your questions. Facility tours and light refreshments will be available. This event is free.

Questions? Reach out to Dani at danielle.wojcik@emilyprogram.com