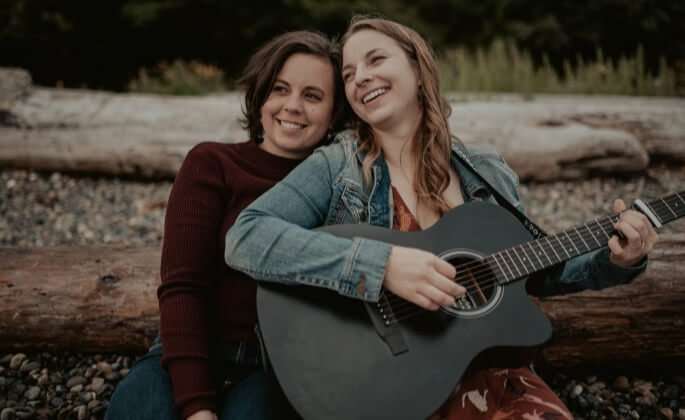 **Content warning: Some stories may mention eating disorder thoughts, behaviors, and symptoms. Please use your discretion when reading and speak with your support system as needed.

Emily Sigrist is a graduate student in Seattle, Washington, pursuing her Master’s in Counseling Psychology. She is a psychotherapist in training focusing her work on the need for an interdisciplinary approach to understanding, healing, and preventing eating disorders. She hosts a podcast called Get Together, writes music with her partner, and shares words on emilykei.com and @emily.sigrist.

When I was in middle school, I started running, and then, I couldn’t stop. What began as my first exercise routine quickly turned into an eating disorder that would follow me for nearly a decade.

In the seventh grade, I left my small, private elementary school to attend the larger public middle school down the street. The transition, and my entrance into my teenage years, stirred up new feelings and challenges that were overwhelming. The changes taking place within my body and my relationships felt enormous, but I struggled to share just how scary it all was for me.

At my old school, I was a theatre nerd, but at my new school, my peers saw me quite differently. I began spending time with a group of kids who lied to their parents, went to parties, and dated each other. I knew that I wasn’t being true to myself, but it felt good to be accepted, to receive attention from boys, and for my friendship to be desired by the ‘cool kids’. It wasn’t long until I was caught up in a world that I was not ready for, but I was thirteen and did not know what else to do but continue on, burying my growing sadness and confusion beneath the surface.

After nearly a year of living in this murky web, the weight of my choices finally caught up to me. I had an immense amount of shame around the ways I had betrayed myself in order to fit in. My parents were not happy with me, and their disappointment led me deeper into my own crushing guilt.

I was desperate to earn back my parents’ trust after a year of disrespecting it. My dad had always been an avid runner, so picking up running made sense to me. We could bond, and I could be ‘good’ again. Plus, focusing on running served as a good distraction from the shame I felt.

It did not take long for my new hobby to take over my life. I quickly become addicted to running and then, for reasons I did not understand, terrified of food. I drew further into myself, became quiet around even my closest friends, and preferred sticking to rules around food and exercise instead of enjoying spontaneous fun with the people I loved.

It was difficult for my community and even for me to understand what was happening. The new friends I made were brave and kind, and tried to help in the ways they knew how. They alerted a teacher about their concerns, who tried to monitor my meals in the cafeteria. But even with these confrontations, I avoided any help I was offered; it was far too terrifying to give up the behaviors I thought were making me ‘good.’ When things started to get scary, I finally talked to my mom about seeing a therapist, but by the time I was sitting in her office, I was back to insisting that I was fine.

Over the years, I would bounce back and forth between relapse and recovery. I started and stopped therapy, started and stopped behaviors. Although I wanted help, I was not prepared for the amount of deep personal work that needed to be done in order to get better. I would be able to set aside behaviors for a time, but even the sweetest of seasons would eventually give way to rigidity and rules: the familiar coping mechanisms for my more difficult feelings.

By the time I was a junior in college, I had experienced a couple of years of relative freedom. I was hoping against hope that my eating disorder was behind me. I viewed my trouble with food and exercise as something that happened when I was younger, but that no longer affected me. I wanted this to be true, but I also knew on some level that I had not yet been able to meaningfully engage the feelings behind the disorder, and that one day, it would be back.

I decided to pick up running again as a way to get my ‘old body’ back in anticipation of my impending college graduation and entrance into an acting career in New York. I figured that enough time had passed since my ‘eating disorder days,’ and that I could go on a diet without my life crumbling beneath me. What began as harmless workouts, again, became an eating disorder that would take me to my lowest point.

Unsurprisingly, I became obsessed with being as healthy as possible, and my commitment to this goal drew me deeper and deeper into isolation. The more I became addicted to the toxic ideologies of clean eating and diet culture, the more I believed that I could be finally ‘good.’ I remember thinking I might die without ever eating anything that was ‘bad’ again.

I woke up one morning in February of 2013, and after a couple of minutes of wandering around the apartment I shared with some friends, I started to feel really strange. It happened so fast: suddenly I was curled up on the floor, unable to speak, and shaking uncontrollably. I stayed like that for hours, my eyes rolling back into my head, my friends holding me: all of us equal parts confused and scared. I didn’t realize it then, but I was having a hypoglycemic seizure. It wasn’t until late in the afternoon that I could speak again, but only in sparse, stuttering sentences. It felt like I was alone inside my head, unable to communicate with the world. It was the scariest day of my life.

I wish I could say that the seizure and my subsequent emergency room visit were the turning point for me. I wish that in the days following, while I slept and regained my strength in the campus health center, that something stirred inside of me to change. Despite how dangerous my eating disorder had become, the honest truth is that my biggest concern at the time was whether my break from exercising was causing me to gain weight.

My commitment to recovery did not begin until later that spring, when a courageous friend of mine, who also suffered from an eating disorder, finally confronted me with the truth: anorexia had complete control over my life. Again. She is the person who was brave enough to make me face what I couldn’t: I needed help, and soon.

After that conversation, I decided to find a therapist who could support me in choosing recovery. I no longer wanted the life that I had created once I realized how horribly rigid and lonely it had become. Going back to therapy and breaking all of my food rules felt a lot like starting my life over again. It was terrifying and overwhelming and world-shattering, but I tried to trust my therapist and the people in my life. There were many angry tears and difficult therapy sessions, but eventually, breaking my eating disorder rules made me feel better, not worse.

The first year of recovery took far more strength than I was capable of imagining. The process was slow, and fraught with rage and fear, but I slowly began to see how my eating disorder was masking what I was really feeling inside. Giving up the behaviors also meant giving up the things I had come to rely on to make me feel better when I was overwhelmed. I had to learn to stop numbing myself by regulating my body, which became a painful but rewarding journey.

As the days turned into weeks and months, I started seeing parts of myself that had long been lost to my eating disorder. But rather than becoming the old me, the one before the disorder, I found that I was growing into a me that I had not yet met before. I found that I could be brave and tender and vulnerable, that I could rely on others in relationships, and I could even be messy and angry and sad instead of palatable and put together.

Almost seven years after the seizure that marked the darkest moment of my anorexia, I am able to live the life that was once unimaginable to me. I left a career that was reinforcing the patterns of my eating disorder behavior, moved from New York to Seattle, and found an entirely new way of living: one that didn’t have rules for how my body could be. At the five-year anniversary of my own recovery, I began graduate school to focus on becoming a therapist for people in recovery from eating disorders.

I now have friendships that are richer and deeper than the ones I could have before, when my eating disorder dominated my inner world. I see my therapist weekly, and I immediately let my loved ones know when I am feeling triggered and in need of extra support. Having a close group of people who I can be accountable to in my recovery has been my saving grace.

Once I was able to stop numbing myself with my eating disorder, I got to know parts of me that were previously shut in the darkest corners of the closet. I met the woman who is now my fiancé, and we live in Seattle with our sweet dog, Peanut. I’m finally able to enjoy myself, my life and the people in it. I can’t even remember the last time that I tried to lose weight.

These days, my focus is on how I can take up more space in the world, not less. I try to ask myself: How can I live as myself more authentically, experience my life more deeply, and engage in my work more meaningfully? I’m so thankful to be able to ask these more life-giving questions, and for the ways my relationship to my body has led me to these new places. I wouldn’t wish what I have been through on anyone, but looking back from where I stand today, I am so grateful for this journey.